William and Michiko Maebori spent a year imprisoned at the Tule Lake concentration camp in California, held behind barbed wire with 19,000 other Japanese Americans, before they were offered a chance to leave. 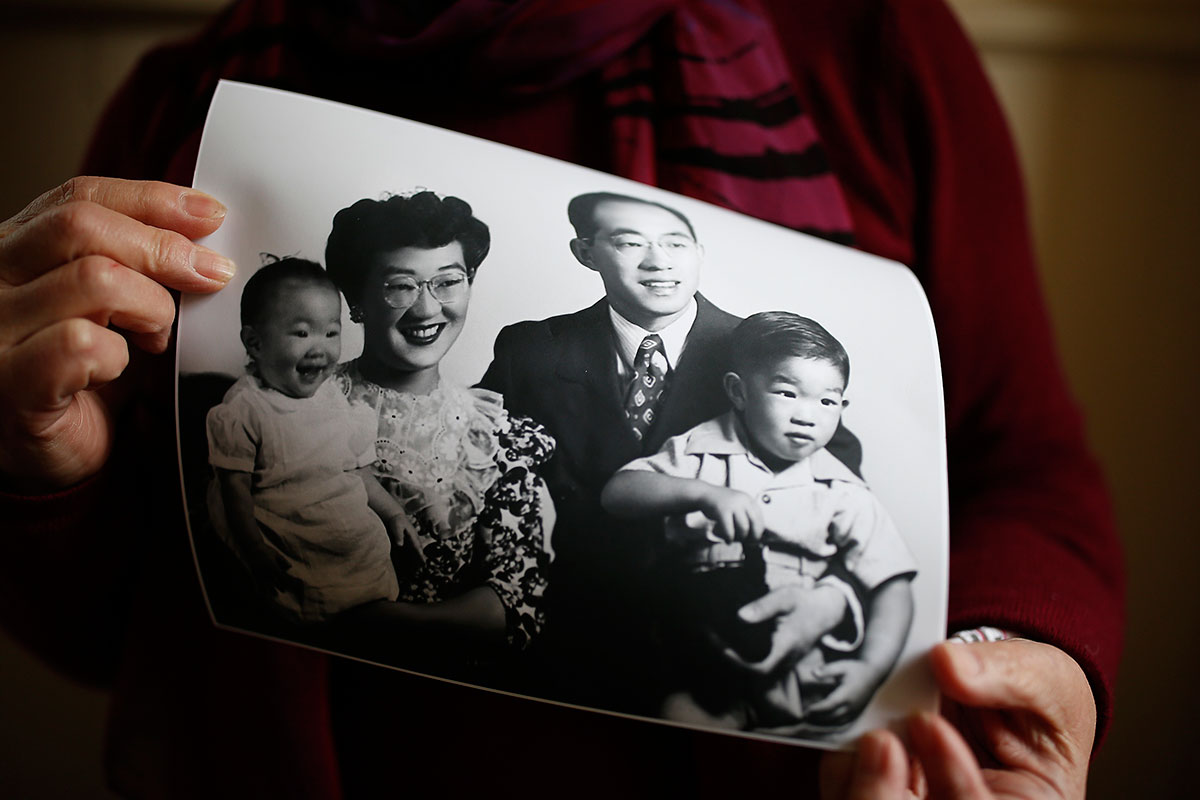 DAVID MAIALETTI / Staff Photographer
The Maebori family was forced from their home in Auburn, Wash., to a relocation center for Japanese Americans. “There was a lot of hate, just like we’re experiencing anti-Muslim sentiment today,” Teresa Maebori says.

Not to freedom, through the restoration of their rights as American citizens, and not back to their home in Washington state. They were released into a different kind of confinement, a government-controlled seasonal-leave farm labor camp in western Idaho.

Their daughter, Teresa Maebori, was born there in 1945.

She grew up to become a teacher, worked 36 years at the Germantown Friends School, helped lead the local Japanese American Citizens League — and never forgot what her family endured.

Now, through Maebori’s efforts, Philadelphia is poised to host a revealing, poignant exhibit on the farm labor camps, a little-known aspect of the wider World War II internment.

“We need to remember our history in the U.S., and not repeat the mistakes of the past.”
Chris Mohr, executive director of the Friends Center

It comes on the 75th anniversary of the presidential executive order that forced Japanese Americans from their homes — and at a time when President Trump’s decision to suspend the nation’s refugee program and block people from seven Muslim-majority countries has provoked protests at major airports and court challenges.

“It’s pretty unsettling,” said Maebori, 71, who lives in Mount Airy. “This is kind of repeating itself. All this hatred toward Muslims coming out.”

The exhibit, Uprooted, runs Feb. 18 to March 9 at the Friends Center on Cherry Street, home to one of the few organizations that spoke out against internment while it was happening.

“We need to remember our history in the U.S., and not repeat the mistakes of the past,” said the center's executive director, Chris Mohr.

Uprooted was created by the Oregon Cultural Heritage Commission and at its core is a series of 1942 pictures by Russell Lee, a Lehigh University graduate who traded chemical engineering for  photography.

As a photographer for the Farm Security Administration, a New Deal agency, he captured life in farm labor camps in Oregon and Idaho — scenes of Japanese-American families trying to persevere and go forward amid shock, shame, and uncertainty.

In a way, the exhibit came about by accident. Historian and curator Morgen Young was searching Lee’s photographs for information on the Farm Security Administration when she came across this lesser-known story of the labor camps.

None of the people in the photos were identified in the captions. So Young started tracking them down, learning more about the camps as she worked. She calls Uprooted “a warning sign of what could happen to any community in this country.”

Library of Congress
The Tule Lake internment camp for Japanese Americans in California, where the Maebori family was sent.

About 33,000 Japanese Americans were moved from the big internment centers to smaller farm camps, all for one purpose: to grow and harvest sugar beets, a valuable wartime crop, and not just because it might ease the sugar shortage in American kitchens.

A Japanese-American family in their tent home at a farm labor camp in Oregon. Teresa Maebori helped bring an exhibit on life in the camps to the Friends Center on Cherry Street. (Library of Congress)

Internees lower the the flag in the evening at a camp near Rupert, Idaho. The exhibit was created by the Oregon Cultural Heritage Commission using a series of 1942 pictures by Russell Lee, a photographer for the Farm Security Administration. (Library of Congress)

Newspaper delivery at the farm labor camp near Rupert, Idaho. None of the people in Russell Lee's photos were identified in the original captions. (Library of Congress)

A camp council meeting at the Garrison's Corner camp near Nyssa, Oregon. (Library of Congress)

In side the barracks at the camp near Rupert, Idaho. (Library of Congress)

A family at the Garrison's Corner camp near Nyssa, Oregon. (Library of Congress)

Resting after work at a camp near Rupert, Idaho. (Library of Congress)

At a camp near Rupert, Idaho. (Library of Congress)

Tents at the Garrison's Corner camp near Nyssa, Oregon. (Library of Congress)

Laundry room at the Garrison's Corner camp near Nyssa, Oregon. (Library of Congress)

Interior of housing at the camp near Twin Falls, Idaho. (Library of Congress)
Previous Next

Sugar beets could be converted to industrial alcohol, used to make synthetic rubber and munitions. Whenever a sixteen-inch gun was fired, the U.S. Sugar Beet Association said in 1943, according to Uprooted, one-fifth of an acre of sugar beets went up in smoke.

With sugar imports cut off from the Japanese-occupied Philippines, the U.S. government increased domestic beet acreage by 25 percent. Demand for seasonal laborers soared.

“There was a lot of hate, just like we’re experiencing anti-Muslim sentiment today,” Maebori said. 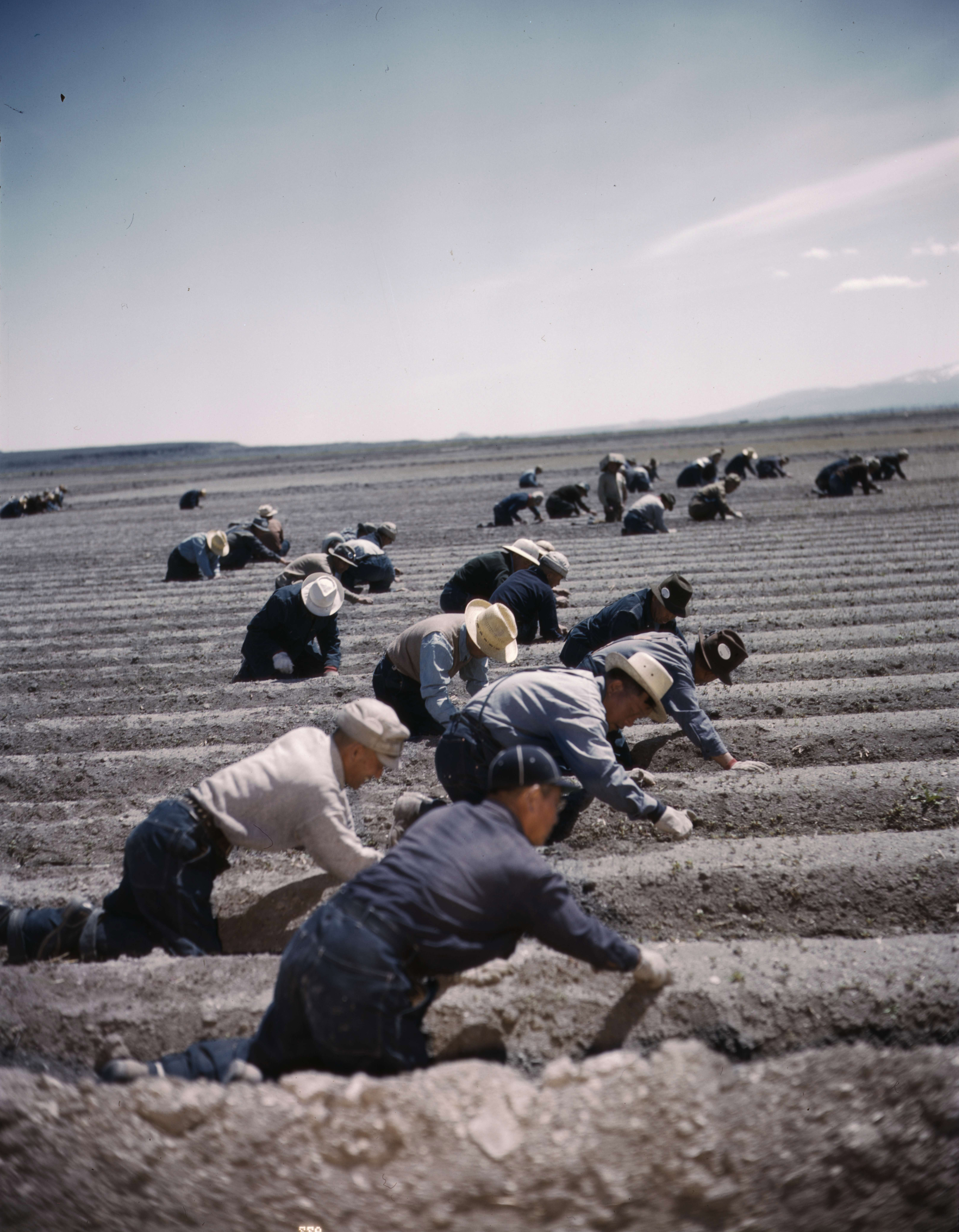 Library of Congress
Interned Japanese-Americans working in the fields at the Tule Lake internment camp in California.

Her mother had been born in Wapato, Wash., and her father in Pendleton, Ore., home of the famous woolen mills. They met at a basketball game, and married on Nov. 22, 1941. 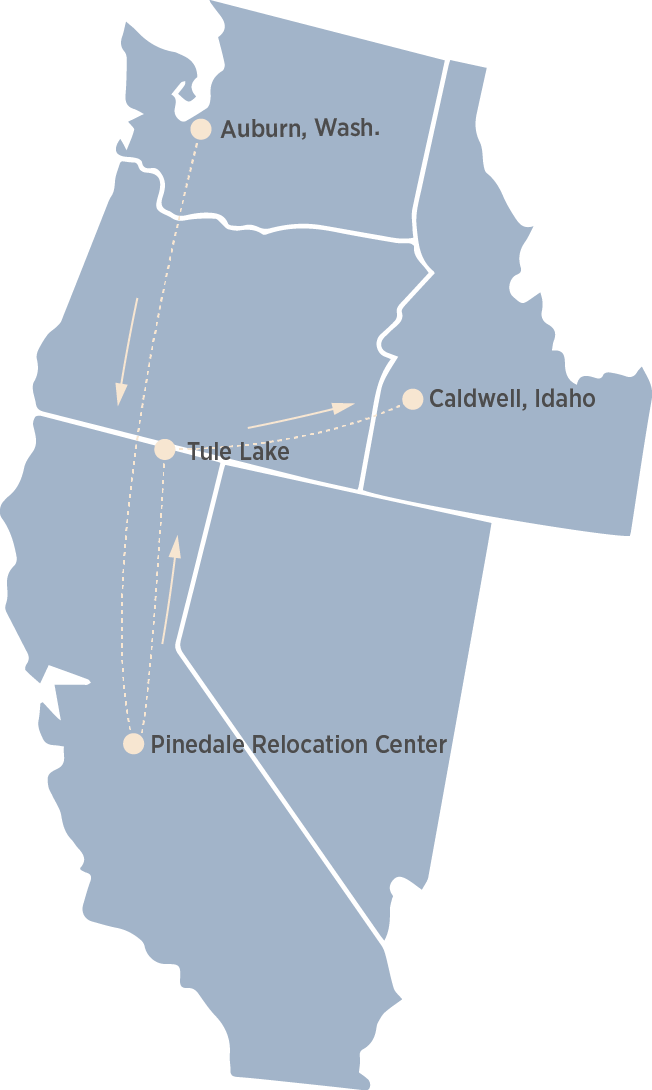 To many in the U.S., Japanese-American neighbors suddenly looked like the enemy. In February, amid hysteria that the West Coast would be attacked, President Roosevelt signed Executive Order 9066, authorizing the removal and incarceration of 120,000 residents of Japanese ancestry. Nearly two-thirds were American citizens.

Maebori’s parents were forced from their home in Auburn, Wash., to the Pinedale Relocation Center in central California, then to the prison at Tule Lake, set in high desert near the Oregon border.

They lived in a 15-by-20-foot tarpaper room, sharing a barracks with five other families. Their first child, Stan, was born at Tule Lake in 1943.

They knew a prison was no place to raise a child. And, as Americans, they wanted to support the war effort.

They arrived at a farm camp two miles west of Caldwell, Idaho, built in 1939 for migrant workers seeking to escape the Dust Bowl and the Depression. The family moved into one of the empty two-room cottages, while other Japanese Americans lived in barracks and tents.

William became a supervisor, picking up laborers in a truck and driving them to farms. His wife, who held a University of Washington degree in dress design, made clothes for the family — which soon included baby Teresa.

Getting ready for a visit into Rupert, Idaho. (Library of Congress)

Baseball game at Nyssa High School with laborers from the Garrison's Corner camp. (Library of Congress)

Laborers playing Go at the camp near Twin Falls, Idaho. (Library of Congress)

Laborers in sugar beet fields outside of Shelley, Idaho. Sugar beets could be converted to industrial alcohol, used to make synthetic rubber and munitions. (Library of Congress)

"Bring Your Nickels": A sign advertising a dance at the Garrison's Corner camp near Nyssa, Oregon. (Library of Congress)

Trucks arriving at the Garrison's Corner camp near Nyssa, Oregon to pick up laborers. (Library of Congress)

A badminton game at the Garrison's Corner camp near Nyssa, Oregon. (Library of Congress)

Working on irrigation in a field near Rupert, Idaho. (Library of Congress)

Worker in a sugar beet field near Shelley, Idaho. (Library of Congress)
Previous Next

The camp was better than the barbed wire and machine guns of Tule Lake, but still a kind of rural jail. An 8 p.m. curfew was in force, and some stores posted signs that warned, “No Japs.”

At war’s end, the Maebori family returned to Auburn. The landlord who had promised to safeguard their belongings had kept his word. They moved back into the same rented house.

William Maebori worked for his brother-in-law, making pots for plants. Another son and two more daughters arrived. Michiko — Midge to her friends — raised the children and earned extra money by sewing wedding dresses.

“Yes, this happened once, it could probably happen again, but there are more people who won’t stand for it.”
Teresa Maebori

The post-war years were busy. William Maebori, who helped run the Little League, Boy Scouts, and bowling leagues, named “Father of the Year” in the mid-1960s. His wife Michiko volunteered at church and women’s guilds, and was later crowned a “Pioneer Queen” of Auburn.

Both parents are gone now. They rarely spoke to their children about their imprisonment. But 70 years later, Teresa Maebori thinks of it, noting that during the presidential campaign a Trump surrogate told Fox News that the incarceration of Japanese Americans set a precedent for creating a Muslim registry now.

“Yes, this happened once, it could probably happen again, but there are more people who won’t stand for it,” Maebori said. “Most people, when they hear about it, they’re appalled, and they think, ‘How could we do that?’ ”